The year many regard as Bob Dylan's best, with the famous World Tour spanning North America, and and the recording of one of the best rock albums ever, BLONDE ON BLONDE. In July Bob Dylan falls off his motorcycle while riding around Albert Grossman's estate in . Dylan and is hospitalized. All concert and radio/TV engagements for the rest of the year are first put forward, then cancelled. This marks the end of the surrealistic rock’n’roll phase. Dylan will reappear mote than a year later a very changed man and performer.

During the first part of the tour in the band consisted of:

When the tour continued in in April, Sandy Konikoff was replaced by Mickey Jones. 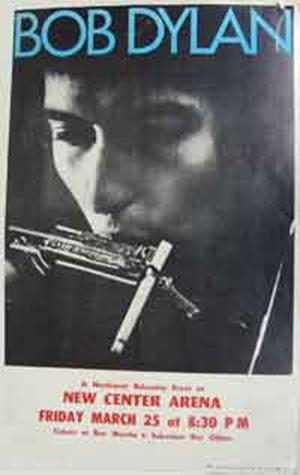 As far as is known  the set always consisted of 7 songs with Bob Dylan on vocal guitar and harmonica. After a 15-minute intermission Dylan returned with his band and they performed 8 songs. There were no encores. The set list stayed pretty much the same at least from and onwards.

X denotes that the exact position in the show is not known. Entries in italics denotes “known but not in circulation”.

The audience tapes from this period are generally very poor. Only Pittsburgh, February 6 is listenable. The tape from Stockholm is very fragmentary. The guy who taped this concert only taped the beginning of most songs since he was afraid to run out of tape. The PA tapes are on the other hand very good and have been widely bootlegged through the years.

This double album was released May 16, 1966 and on CD first time April 1987 with several shorter mixings, later remixed and re-released in full length. Approximately 73 minutes.

Blonde On Blonde stayed 30 weeks on the US charts and peaked as #9. In England it reached #3 and stayed 10 weeks in the Top 10.

Hard To Handle - With Tom Petty And The Heartbreakers in Sydney, Febr. 1986.

Eat The Document was filmed in Europe April-May 1966 as a sequel to Don't Look Back. It as directed and filmed by D.A. Pennebaker and edited by Bob Dylan and Howard Alk two years later in the summer of 1968. Eat The Document premiered at the New York Academy Of Music, February 8, 1971. Eat The Document documents Dylan's tour of Europe back-stage, on stage and off stage. It is filmed in colour and runs approximately 52 minutes. It is yet not available as commercial home video.

[2]  Covered by The Original Marauders on their album "Now Your Mouth Cries Wolf" - Pied Piper 1977.

[4]  May be an arrangement only, not an original song.

[5]  This song has not been copyrighted. It was performed in a hotel room in Denver, Colorado, 12–13 March 1966 together with Robbie Robertson and taped by Robert Shelton.

Blonde On Blonde – review by Stephen Pickering in A Commemoration

Copenhagen Press Conference May 1966 in Occasionally #2

Eat The Document: A Second Helping – article in Endless Road #6

Eat The Document: Another Piece In The Jigsaw – by Graham Ashton in Endless Road #7

Eye To Eye – A Conversation With D.A. Pennebaker – in The Telegraph #26

Freeze-Out, Visions Of Johanna And The Nightingale's Code – by Clinton Heylin in The Telegraph #16

London Press Conference May 1966 – in Occasionally #2

Lovers Emotions: An Analysis of Visions Of Johanna – in Talkin' Bob Zimmerman Blues #4

Tarantula – a perspective – by Elia Katz in Praxis: One

Tarantula: A Question Of Interpreting – by Stephen Pickering in A Commemoration

Temporary Like Achilles – by Nick de Somogyi in The Telegraph #27

The 1966 Line Recordings – by Clinton Heylin in The Telegraph #25

The Original 1966 Playboy Interview – in Whaaaat?

Understanding Dylan – by Paul Williams in his book Outlaw Blues

Visions Of Johanna – by Nigel Hinton in The Telegraph #9

Visions Of Johanna: Dylan's Romantic Dilemma – by Louis Morgan in A Commemoration