STILL ON THE ROAD

2.   Stuck Inside Of Mobile With The Memphis Blues Again

Also rumored from these rehearsals are four or five unidentified songs, believed to be new Dylan compositions. At least two of these were done with vocals, the other were instrumentals.  (Source: Mike Wyvill & John Wraith: Jotting Down Notes, The Telegraph, # 54, Spring 1996).

There are at the time of this update no circulating tapes from these rehearsals.

3.   All Along The Watchtower

This was a privately sponsored corporate event for 250 persons! The show was held in the Pavilion, a 15,000 square-foot multi-use facility which was set up as a nightclub for this event. Crosby Stills and Nash were also on the same bill for the Friday night show.  Rod Stewart performed for the same group on Saturday night, however, this event took place at the Fleischer Museum in Scottsdale, Arizona.  The show was sponsored by Nomura Securities International, Inc., a subsidiary of Nomura Securities Co., Ltd. Nomura Securities Co., Ltd. is the largest brokerage house in Japan with sales of 6.6 billion dollars in 1994.  Nomura is a leading underwriter of bonds and is heavily into equity-related issues in the Euromarket, but the firm's main business is its Japanese stock brokerage.  Interestingly enough, Nomura helped to underwrite a US issue of Sony stock in 1961.

There is at the time of this update no circulating tape from this occasion. 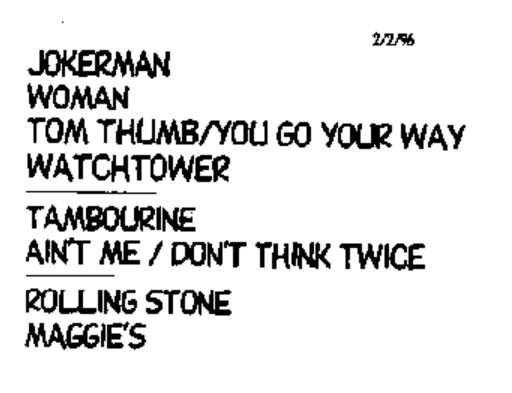 Released on a four-track CD included in the art book Wood On Canvas – Every Picture Tells A Story, Genesis Publications, Summer 1998.