Too Much Of Nothing

A lot of time spent in studios in and results in the songs released on Self Portrait and New Morning, and later on Columbia Records "revenge album" Dylan. Apart from the songs on New Morning these songs are covers. No live appearances are known from 1970, only the brief appearance in the TV program Earls Scruggs Documentary in December. 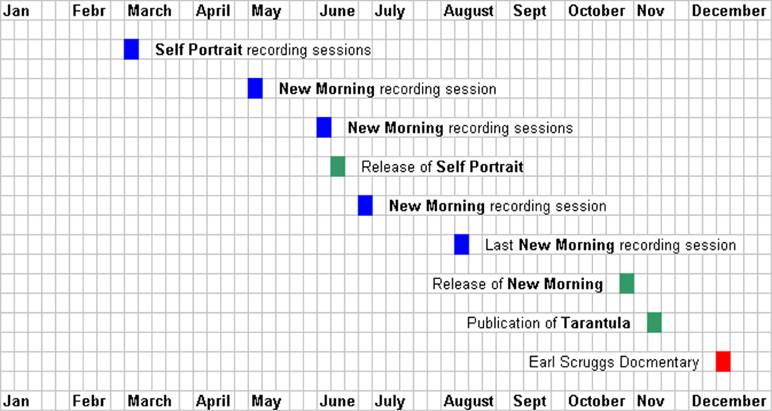 For details please refer to the corresponding Still On The Road session pages.

This album was recorded during three recording sessions during spring , and three more a year later in . Session overview[1]:

For more details about some of these sessions please refer to the corresponding session page in Still On The Road.

The other songs on Self Portrait have probably never been played live.

Performances during The Never-Ending Tour:

At least 195 takes of 50 songs during 8 recording sessions yielded the 12 songs on New Morning. 1 further song was released as a single and another 7 were later released on Dylan. A couple of the songs were also tried out during the Self Portrait sessions, see previous chapter. Here's a summary of the sessions[6]:

For more details about some of these sessions please refer to the corresponding session page in Still On The Road.

Day Of The Locusts, Father Of Night, One More Weekend, Sign On The Windo, Three Angels, Time Passes Slowly, Went To See The Gypsy and Winterlude have probably never been played live.

There are no officially released live versions of the songs on New Morning.

Performances during The Never-Ending Tour:

[4]  No session sheet available from this session, there was probably several takes of each song.

[5]  No session sheet available from this session, there was probably several takes of each song.

[17]  Co-written with George Harrison and recorded by him on the album All Things Must Pass, which also contains a nice cover of If Not For You.